You are here: Home / Diana Arteaga 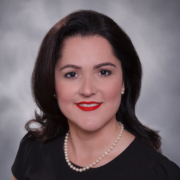 Diana Arteaga has been involved in CABA for many years. She is the Chair of CABA Briefs, an active member of the CABA on Cuba Committee and has worked on the most recent report to the OAS on behalf of Oscar Elias Biscet and 75 other Cuban dissidents. In September 2019, she was recognized as CABA’s member of the year. While at FIU Law, she participated in the mentorship program and was awarded CABA’s Mario P. Goderich scholarship.
Diana is the Public Affairs Manager for Coca-Cola Beverages Florida. She has over 10 years of proven experience in key leadership roles at the municipal, state and federal level.
Diana serves as Board Secretary for the San Carlos Institute in Key West. She has served on the Florida Bar's Consumer Protection Law Committee and in the Municipal Ethics Officers Program with the Miami-Dade Commission on Ethics & Public Trust.

Tweets by @CABAatWork
Scroll to top